The application is hosted here.

The source code can be found here.

Yes, I figured the one thing that the world really needs is one more To Do application. Seriously, though, when I was working on Finance Manager, I realized I made a few mistakes, specifically with the way I was doing Angular as well as building a REST API. I therefore wanted to build something simpler- yet something that I would personally use, and in the process try to do it “more right” and learn something in the process as well. I think two of the key new things I learned building this application was routing with Angular and working with MongoDB. I ended up building a Mongo provider for the Commons Library as well. I also think this servers as a better example of how to marry TypeScript with Angular. 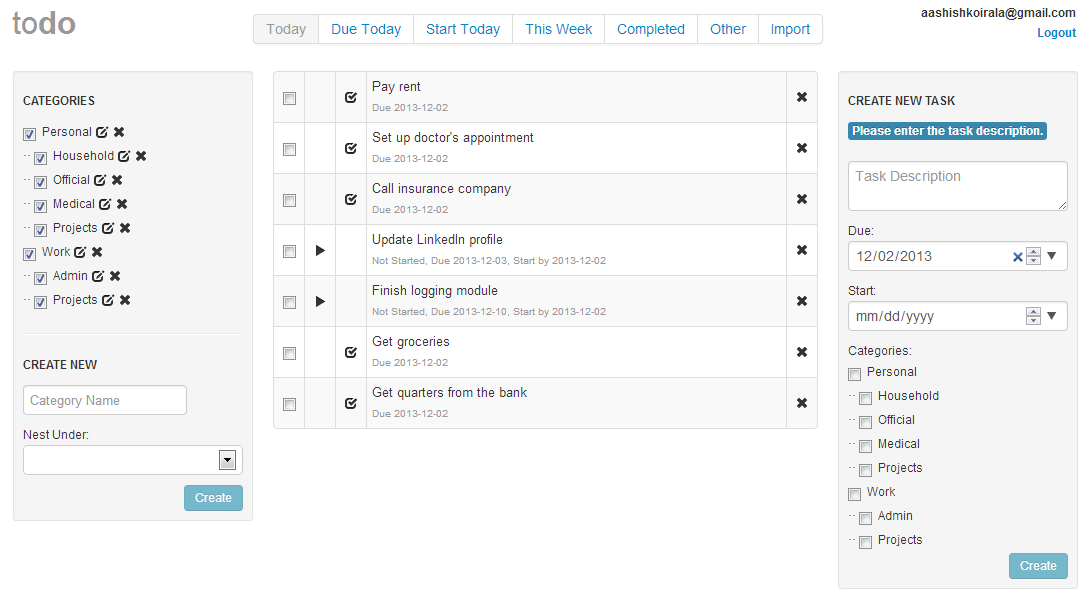 I had my complaints about Astrid, but was getting used to it when it got yanked out of existence all of a sudden by Yahoo (good for them, though). Rather than trying to go and look for something else that worked for me, I decided to build it and learn something in the process as well (which sits well with my thoughts on when to roll your own as a developer - probably a post on that soon to follow). With this application I can create nested categories, create tasks within those categories, give them due dates and start dates - and walk them through a work-flow of created, started, in progress and done (or just created and done - depending on what kind of task it is). Two features I really like that I missed in Astrid is the ability to bulk import tasks from plain text - and the ability to perform bulk actions.

This time, I also made sure I could actually deploy it to the cloud once I was done with it. It is deployed here, using AppHarbor. Since I’m too cheap to want to pay for a To Do application, I’m using the free instance. I intend to use this for my own personal use, but if you plan to use it - be aware that this is a free, development instance and could disappear tomorrow. I would love it, however, if you wanted to look around and offer me feedback.

Other than the obvious gaps to fill (as marked by the many “TODO"s in the source code), one thing I definitely want to do at some point is build a mobile front-end to this - and also make the web UI use responsive layout (if you open the web application in a phone, it looks really messed up). Then there is always that colossal task of going back and fixing mistakes I made with Finance Manager.

Tags: csharp dotnet
Previous: Finance Manager
Next: On Rolling Your Own